The Good Thief
by Hannah Tinti

A one-handed orphan gets adopted, beginning a wild romp through the streets of New England. 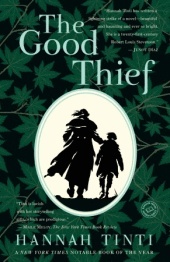 This book’s entertainment value comes from following a reluctant protagonist spiraling into deeply criminal shenanigans. The author’s prose has a hint of wryness that kept me interested, and the worldbuilding was kept at the immediate, local scope, which I appreciated.

Apparently some criticism from fans of historical fiction say they’d prefer more commentary on the political climate, but I didn’t mind the lack of history lessons. The novel takes place during the Industrial Revolution, the white folk speak of Native Americans as barbaric Indians, and that’s about all you need to know.

I also found it funny how some Goodreaders criticized that a few characters were useless and didn’t serve the plot. I really wonder what this attitude says about our society? One-third of the characters in this story have a disability, and they live their lives as best as they could.

Given how morally unscrupulous most of the characters are, the characterization is top-notch for an adventure thriller. Of course the mafia goons don’t get background or sympathy, but otherwise the there’s a balanced ratio of realism and wackiness. The twists are great and the story ties up neatly.

The ending is saccharine compared to the events that lead up to it, but at the same time a little happiness is deserved, even in a world full of hard and bitter living conditions.