The Throne of Bones
by Brian McNaughton

This is a collection of horror vignettes that link together. I found the last story to be more in-line with a traditional fantasy plot, but the rest are unique in concept and execution. 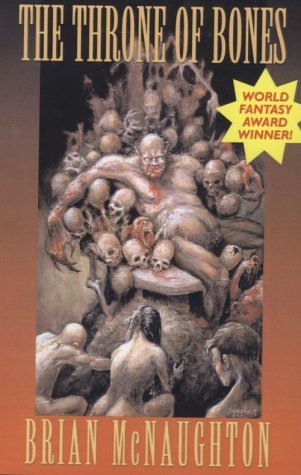 The prose is dense and convoluted, especially during the chapters from the professor’s perspective, so I had to slow down to read it. Unfortunately, I had to resist the temptation to use a dictionary for esoteric words. It very much reminds me of the MBTI INTP personality type. I found the metaphors funny, verbose yet apt.

“Believing ghouls to be masters of forbidden magic, such depraved nitwits sometimes sought me out as the prophet who might point them to their idols. They most often found themselves gifted with the magical power to fly, assisted by my foot.”

The content leans toward forbidden sexuality, like necrophilia and whatnot, as the book takes place in a world of undead, ghouls and decay. You can expect amost every character to be a sexual deviant or pervert. Because most of them die one way or another, there’s not much character development. Strangely enough, love is the main theme in these works.

The names of the characters are silly and remind me of Dungeons and Dragons characters, or World of Warcraft lore. If you want macabre stories with creepy twists, try this book.