Blood Meridian, or the Evening Redness in the West
by Cormac McCarthy

An epic-styled Western telling of the power struggles between various forces after the United States acquired Texas. 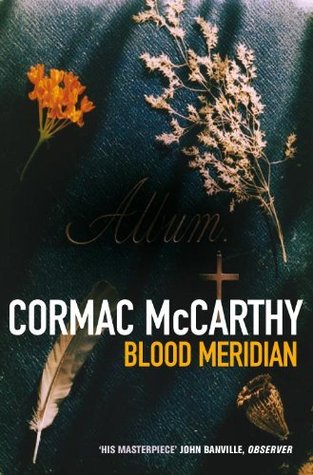 This book was a drop for me. I could not get past the fifth chapter.

The first thing that draws you in is the prose. It is very beautiful and chock full of gravy giblets. It’s much better than American Psycho’s prose, but the plot is just as droll. McCarthy’s lack of punctuation is a stylistic choice to blur the events into an indiscriminate smear, which ruins the visual reading experience. The soldiers can’t go one step without bloodying a tavern or finding some leftover battle flesh fouling the desert.

Perhaps Blood Meridian would be better consumed as an audiobook, pronounced and narrated so the lack of punctuation and the endless depictions of traveling and scenery can tickle your ears, but that just means the work doesn’t stand well on its own, and a 3rd-party, the voice actor, is necessary to bring it to life.

There’s basically no character development that can be discerned. Everyone is an NPC (non-player character), even the protagonist who is called “kid” or “boy.”

If you like military tales, pure technical descriptions of action and pillaging national treasures, you might find the story palpable. Otherwise it reads like disgruntled male self-insert wish-fulfillment; a prettier and more intense Twilight. Poor dude from Tennessee goes on a rip-roaring scavenger hunt, upgrading from a worn-out mule to a real horse, while learning Spanglish!