Nightmares from a Lovecraftian Mind
by Jordan Krall

A collection of horror short stories, from small scares to the cosmic, featuring urban sprawl and incongruous elements. 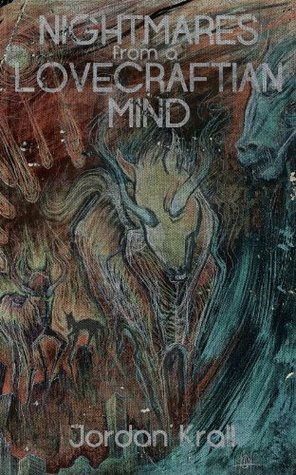 Overall, the stories were weird and had dream-like qualities as advertised. However, I didn’t find them too nightmarish, nor emotionally striking. The diction was incoherent at times, which made the plots hard to follow, yet sentence syntax was too simple to resonate. There were a lot of repeat vocabulary words within some stories and between stories, making me aware the narrator is the author, although that is to be expected in a collection like this.

I found metaphors like these have coherent imagery and theme, so it was easy to understand:

She looked deflated, the silk garments
resembling nothing more than purple death shrouds.

However, there were often many crowded and hard to read lines:

I spit fire, burning my fingers into loops.
They fall down the drain, unwilling to bow to the sun in fear.

For context, the characters are in a room, not in space. It’s hard to understand this sentence because it’s noun-heavy. A “loop” is too abstract for me. Is it plastic goop, or stringy like yarn? The sudden fire and mention of a sun, but lack of temperature description, or sweating, or any supporting sensory details, made it hard to understand what was happening. Even if it was a hallucination, it should feel real.

I did read Krall’s introduction, where he says his prose isn’t as good as H. P. Lovecraft, so this probably tainted my perception and became a self-fulfilling prophecy. Since I’m not familiar with cosmic horror, I can’t say if this type of writing is on par for the genre. Although I don’t have much basis for good prose, I find Codex Nihil’s to be quite spectacular (it sets the bar high).

However, Krall had a unique perspective and vision for all his stories, even if his tales could use polishing. The section A Reptant Hell is a group of stories that follow the same timeline. The payoff was satisfying because of all the random actors that came together in the end. “Hail Desire and Bodies of Cold Gentlemen” seemed to allude to “The Yellow Wallpaper” by Charlotte Perkins Gilman, an introspective piece taking place in a single room, which I thought was unique compared to the others which had external conflicts.