The novel follows the life events of a fictional veteran who never actually got to fight in World War II, as he was shortly captured and turned into a prisoner. Unlike a traditional plot, Slaughterhouse-Five resembles a memoir format. 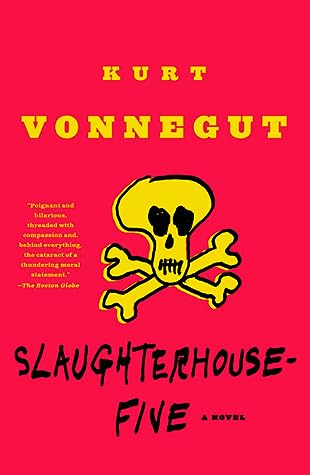 I’ve been meaning to read this book for a while because I’ve always heard that Vonnegut is an acclaimed author. However it was difficult for me to get through the first chapter and I dropped it temporarily. Eventually I forced myself to finish it for a book club.

I thought it was interesting that the author is clear about his political stance on war. Most of the events definitely come off as candid observations from his own experience. The narration felt emotionally numb, and it seemed the side characters were more real than the main character, which gives the story its Absurdist flavor. I wonder if the story could’ve expanded on the stakes, but it’s possible that Vonnegut didn’t want to emphasize any point.

I wouldn’t consider this book a must-read or a game changer, but it’s also dated, and the impact of its message might not resonate as much in the age of the Internet and desensitization of ultra-violence in media. The overall message reminded me of The Things They Carried by Tim O’Brien. Also I’m not a huge fan of military fiction and usually I drop them in a heartbeat, but Vonnegut’s voice carries the story through.