Do Androids Dream of Electric Sheep?
by Philip K. Dick

As people raise robotic animals, a cat-and-mouse game of android hunting only helps the corporation manufacture them stronger. 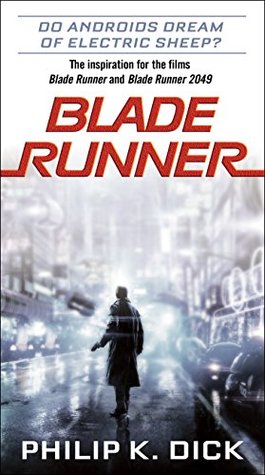 Overall the story was a decent read. I think the prose is less confusing than Neuromancer’s.

Do Androids Dream of Electric Sheep? (DADoES) features two different men, a laborer and a cop who hunts androids. While the rogue androids are antagonists, they didn’t really seem that bad. I guess that was on purpose, since their deaths are supposed to be seen in light as human deaths, no matter what the government says. I wanted to know a little more about what villains did, but the author simply implied they caused a rebellion and killed some people. The characterization felt really glossed over for something that should have more weight.

The overall plot was alright, it had enough directions going for it. I felt like the story revolved a little too much around sex and had to make sex the central axis of the android dilemna. There’s a whole list of more interesting moral tussles for a story to explore, but the author went ahead and wrote the climax of plot to the most boring thing, which is to make the protagonist copulate with a teenage-bodied android. Just because. I don’t think the author really had a rationale for it, other than dispensing out wise words through a bounty hunter: “Androids are spoils of war, so make the most of them” (paraphrased). I guess the cop protagonist is crude, unsophisticated, human and sinful, and that’s that.

The book reminds me of the anime Psycho Pass. Both stories describe how empathy is the key differentiator between normal humans and criminals.

The book is dated, so I’ll rate it a little higher for being engaging. It is not as much of a chore to get through as some other books. If you’re okay with a largely male-centric perspective, and about showing kindness to insects, DADoES is a good read.